Welcome to 2019! I thought I'd start it out with a review of the recently released 2018-19 Australian Baseball League cards from Choice.

I bought a box of the 2018-19 Australian Baseball League cards at Fort Narrabundah two weeks ago. This set is the first release of official ABL cards that can be bought since the 2013-14 team seats made by Dingo.  (NB: The Brisbane Bandits have apparently been releasing team sets each season but it's been difficult to find info on these. I've recently gotten some of these from this and last season  and will put up some checklists for those soon. There was also the promotional packs of ABL cards given away to kids at Stadiums for a round back in the 2017-18 season, but these are nigh on impossible to find.) These are the first ABL cards most collectors will have had a chance to collect since those 2013-14 releases. 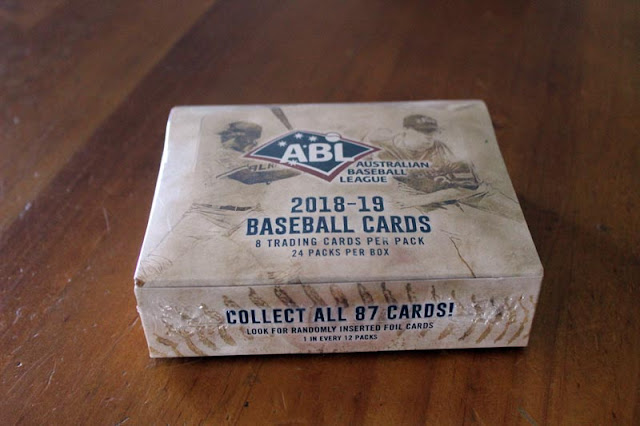 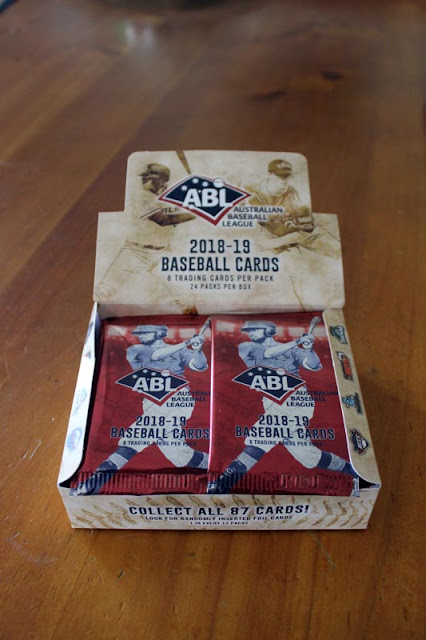 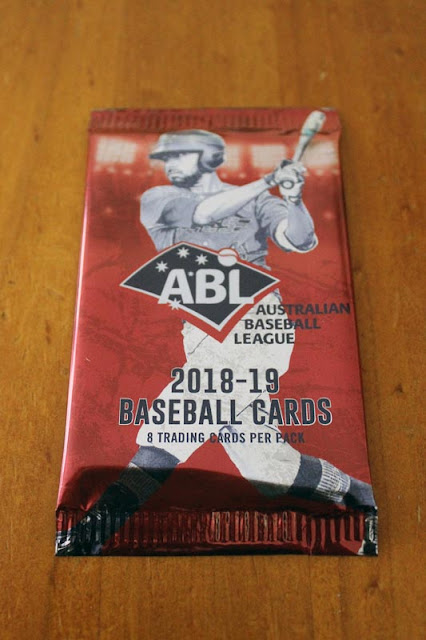 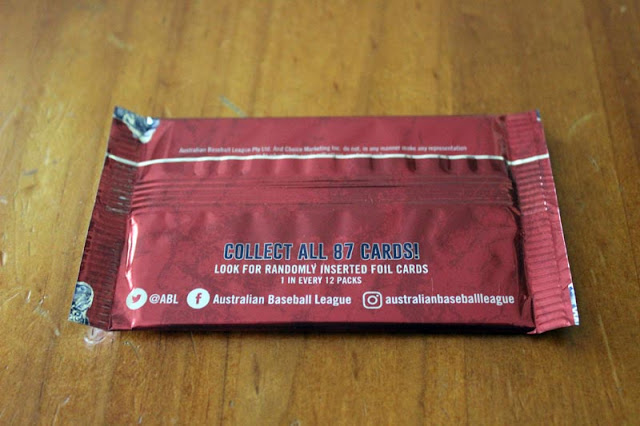 The cards were available at ABL stadiums and online from the online Sydney Blue Sox shop. (Although, at the time of writing, both my local stadium and the online store were out of stock of the cards, so they seem to have sold well. The Sydney Blue Sox owner said that they did have an order in for more boxes.)

Set breakdown and Checklists:
The set contains a mixture of current players as well as ABL alumni. The foundation ABL clubs each have 11 cards except for Perth which has 12. Expansion team Auckland has 8 cards and Geelong-Korea has 2 cards. Those common cards are numbered 1-77. The two checklists are separately numbered as 1 of 2 and 2 of 2. The 10 foil cards are numbered as a part of the main set (78 through 87.) The checklist of below - I've highlighted players in red who have played MLB at some time during their careers. 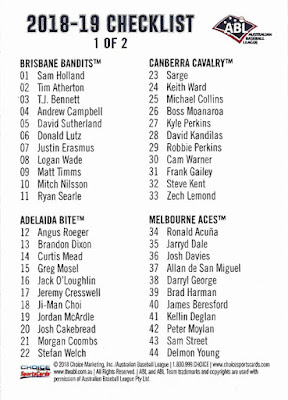 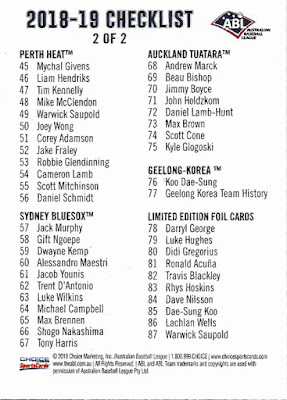 My box break:
Well, I broke open my box during the week and got the following:
Common Cards: 72 of 77 different cards - I was 5 cards short of a full set of commons. That was a bit disappointing seeing as you'd expect a full box, containing 182 common cards to be able to yield a full set. 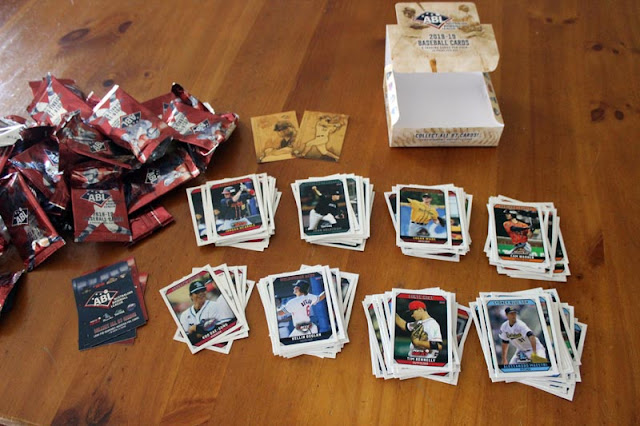 With the foils, there were 4 that I were interested in - the Aussie MLBers - Hughes, Blackley, Nilsson and Saupold. I had a 50% success rate, pulling the Rhys Hoskins foil (current Philadelphia Phillies player), which I wasn't interested in, but I did also score the Dave Nilsson foil. 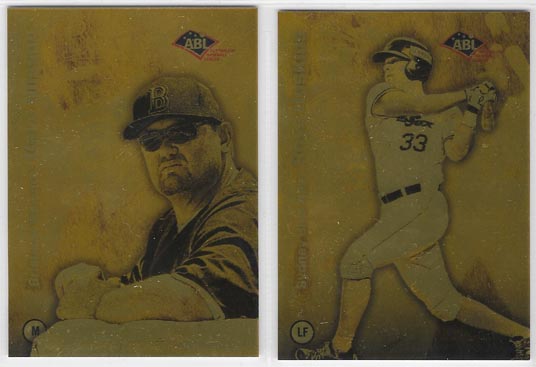 My opinions of the Set:

First off, it's great to see official ABL cards back. I hope this turns into an annual release. However, there is definitely room for improvement in a number of areas.

Player selection: I'd give probably a 7.5/10. I like the fact that they've included a number of ABL alumni who have gone on to play in the majors as a part of the commons set. There are still a number more MLBers who didn't make it into the set. I'd probably prefer to almost see a split and see an ABL Alumni set of MLB players, and have the general ABL set as just photos of the current players.


Being a short season league, there is very little turn around time to produce a set with current photos though - the lack of any Geelong-Korea players is an obvious example of this. All of the Auckland players either use shots of them representing New Zealand in their Diamondblacks uniforms or in a minor league team uniform.

Photos: I'd give these probably a 6.5/10. I understand how difficult it can be to get decent photos. I easily shoot 1000+ photos per team at a game to try and end up with 20 decent shots of the players. Whilst some of the photos are good - generally crisp and clear, too many of them - maybe 25% - are not of a printable quality in my opinion. If they were my own shots I would reject a number of these as being too grainy, having too harsh shadows, having motion blur or simply not being able to see enough of a player's face. I don't know where they sourced their images, but I'm surprised at the quality of some that made it through.


Card Design:  I'd score these a 6.5/10. I don't know if this is a standard design done by Choice this season, but the card design in my opinion isn't very good. I don't like the floating logo over the player photo and the rest of the design is fairly basic.

I do like the card backs, but wish they were more consistent as to which league's stats they were going to include - some show ABL, some show MLB, some show foreign leagues, but there doesn't seem to be a consistent theme.

There are also a number of content errors on various cards that should have been picked up in quality control - eg the David Nilsson foil card lists him on the back as being a member of the Melbourne Aces instead of the Brisbane Bandits. My Rhys Hoskins foil says that he played for the Sydney Blue Sox during the 2015-16 season ... and then lists his ABL stats as occurring in 2017. I'm presuming that all of these type of issues that are identified will remain as Uncorrected Errors.

The foil card design's are overtaken by the gold background. You can see in the scans of the foils that you can barely make out the players names in the scans. They're more legible in real life, but I would change this overall design if a follow up set is released next season.

Printing: I think this set is only about a 6.5/10 again. My biggest gripe is the poor centering of many of the cards in the release. I was most disappointed to see that the first Acuna card that I pulled was very poorly centered. Fortunately I was able to get a better centered one in a later pack, but I'd hate for this to have been the only card of his that I pulled.


An additional gripe is that the foil cards are relatively thin - they're a thinner stock than the common cards. Would like to see a standard card thickness across inserts and common cards.

Overall: There's definitely some collectability in this set - official cards of a number of former and current MLB players as well as current players, many of whom are playing in the minors in the USA. There should interest from overseas collectors as well as the small Aussie market. I'm putting many of the issues down to being teething issues on a first attempt at trying to get out an initial product. Hopefully we'll get to another set next year and that some of the feedback on quality control etc is taken on board and we see an even better set next year. It's great to have some Aussie baseball cards being made again :)
Posted by Adam and Elissa at 12:25 PM