OK, the 2014-15 Australian Baseball League season started last night. Here's my final update of the import players on the rosters of the Australian Baseball league teams as of Opening Day of the  2014-15 ABL season. As always, there may be one or two imports I've missed, and rosters will change throughout the season.

New additions since the last post are in red. Details of 19 imports added since last update.

Canberra Cavalry Use One of My Card Photos

Spotted the following item on Facebook in a post by the Canberra Cavalry, advertising their Australian players for the season about to start.


They obviously had issues getting photos of some of the players, as many of the photos aren't the best quality. I couldn't help but noticing that the photo of Aaron Thompson, who transferred to the Cavalry mid-season from Brisbane, just happens to be my card of him in Cavalry uniform from late last season, as shown below.

That means Adelaide, Perth and Canberra have all used my photos on Facebook, and NSW Baseball have had one on their site. I guess I'm just waiting on Melbourne and Brisbane to use one of my photos now :)
Posted by Adam and Elissa at 11:00 AM No comments:

I've updated the list of Australian sportsmen in MLB, the NFL, NBA and WNBA on the respective blog pages.

It's been a fairly lean time on the baseball scene. Since Australia's 31st MLB player, Liam Hendriks, made his MLB debut in September 2011, there have been a further eight ABL alumni who have made MLB debuts ... and not one of them has been Australian.

The NFL has also been fairly light on, with the ranks of the Aussies on the gridiron thinning out to just two - and of those, Jessie Williams looks to be out for the season again with another knee injury.

On the flip side, it looks like the NBA season will start with 6 Aussies on team rosters, and another three who just missed the cut.

And Nathan Walker was the first ever Aussie drafted into the NHL earlier this year, veen if he's yet to play a a game.

Here's hoping that the Aussie MLB pipeline kicks into gear next season.
Posted by Adam and Elissa at 11:00 AM No comments:

In a worrying sign, I haven't heard anything about official baseball cards for the 2014-15 Australian Baseball League yet. Dingo produced cards for the 2013-14 ABL season, and the official announcement with details didn't come about until Oct 30th 2013 - right before the season started. There had however been teaser information and adverts online from around late August 2013.

I emailed the graphic designer who worked on last year's cards and asked if he knew anything. He said that he didn't know what was happening between Dingo and the ABL, so it looks like he hasn't been engaged to do any card designs for this season.

I'll keep an eye out, but it doesn't look promising.
Posted by Adam and Elissa at 11:00 AM No comments:

Further updates to the list of imports coming Down Under for the 2014-15 Australian Baseball League season. Pretty sure all of the affiliated players are locked in, and it's mainly just independent players being added to finalise rosters. Main exception is the Perth Heat - I haven't seen any roster information for the Heat yet. I have added the names of 3 imports that I identified as Heat players in a pre-season game, so I'm assuming that they're on the roster for the season. This included Joey Wong, an import who played for Perth last season as well.

New additions since the last post are in red. Details of 11 imports added since last update.

Below is a summary of information about the import players I know so far coming to Australia for the 2014-15 Australian Baseball League season. I'll post updated versions of this list as roster announcements are finalised over the coming weeks. [Final Update: 31st Oct]

Developing my original theme, I removed out the team wording to just leave the team logo, and changed the position to the player name. I figured that I wanted to still include the player's position and uniform number, and struck on the idea of using "stubs" on the side of the design.

I'm still not thoroughly sold on the colored border though. The Blue Sox cards with that border look like the back of a bad early 80's Fleer card.

Here are the same cards with white borders for comparison

It's a week since I first posted the list of known Affiliated imports coming Down Under for the 2014-15 Australian Baseball League season. New additions since the last post are in red. Details of 10 imports added since last update.

Below is a summary of information about the import players I know so far coming to Australia for the 2014-15 Australian Baseball League season. I'll post updated versions of this list as roster announcements are finalised over the coming weeks. [Final Update - 31st Oct]

Well, I've forced myself to finally get off my butt and work on the card backs for my 2013-14 ABL card designs over the last 5-6 weeks. I've completed 108 designs so far, which is enough cards to make it economical to send to the printers. That's over half of my designs for last season finished, covering all of my designs for the Adelaide, Brisbane, Canberra and Melbourne players, plus a couple of Perth Players thrown in for good measure. 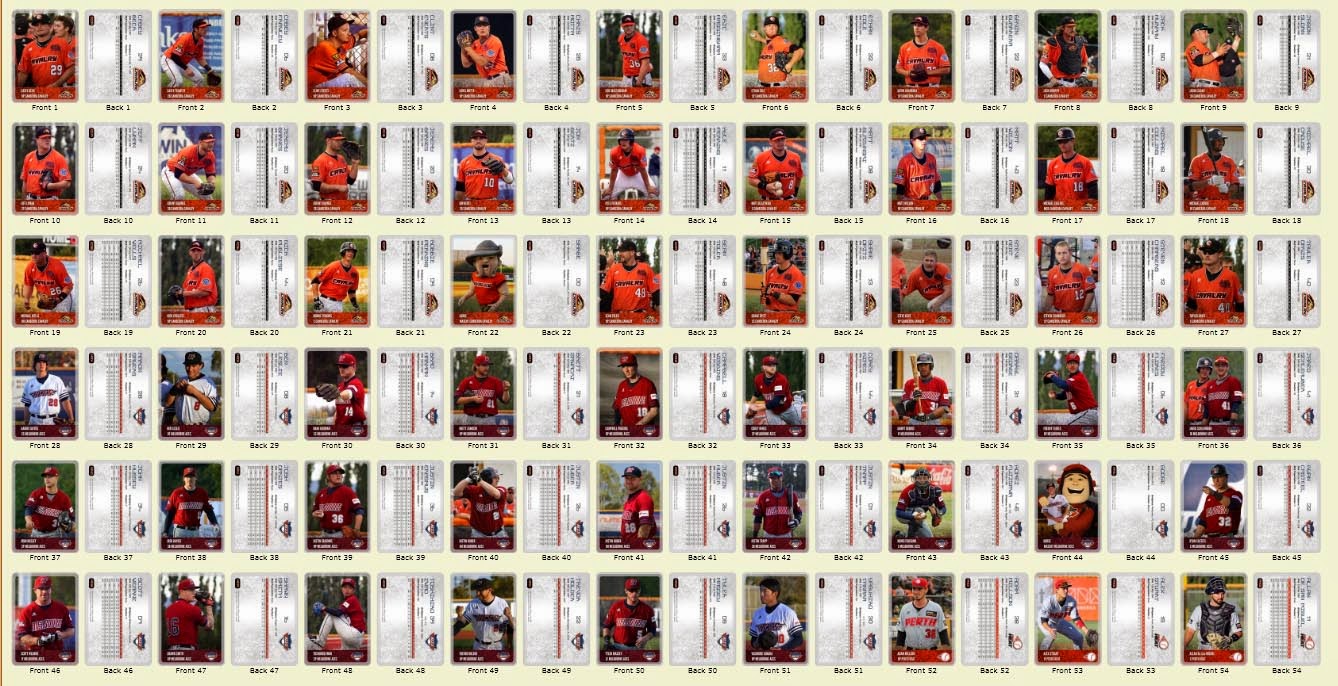 Looking forward to seeing how they turn out.
Posted by Adam and Elissa at 11:00 AM No comments:

With the season less than a month away, I'm only just starting to look at designs for my 2014-15 ABL set. This is my very first take on the base card design. As always, it'll go through a lot of iterations, but in the absence of other cards to show you, I thought I'd put up my starting designs..

So, some thoughts on designs for this year's set are as follows.


The above are my first attempts. The bottom of the card was taken from the "Flashbacks" concept card designs I'd grabbed from an online tutorial. I'm working out how I want to modify this for several reasons.
As always, any constructive feedback is welcome.

The opening game of the 2014-15 Australian Baseball League is on the 30th October. It's time to start looking at the details of the imports coming from the MLB organisations and elsewhere to play Down Under in 2014-15. Below is a summary of information about the import players I know so far coming to Australia for the 2014-15 Australian Baseball League season. I'll post updated versions of this list as roster announcements are finalised over the coming weeks.

I had already made a card for May, one of Sydney's American imports for the 2013-14 ABL season. However, that card featured him in the grey away uniform and  I was able to subsequently get some shots of him in the Blue Sox' light blue home uniform later in the season.

This card represents the last of my 2013-14 ABL card designs. I'm working on the card backs, so that I can get my set printed up for myself. The start of the 2014-15 ABL season is only 4 weeks away, so the blog entries over the next couple of weeks will talk about the roster moves for 2014-15, especially the imports coming to Australia, and card concepts for the coming season's card set.


Perth local Mitchinson returned to the Perth Heat for the 2013-14 ABL season, his second in the league.