Kaminsky is an American import who played with the Brisbane Bandits during the 2013-14 ABL season. Kaminsky spent one season in the Cleveland Indians minors system in 2010, spending the following years playing in independent leagues. In 2013 he played for the Lake Erie Crushers of the Frontier League.

Cannon is an American import from the Los Angeles Dodgers who played with the Adeliade Bite during the 2013-14 ABL season. Cannon spent 2013 with the Rancho Cucamonga Quakes, the odgers High A affiliate in the California League.

I was happy with this shot in that it was one of the few player shots I got from my trip to Melbourne, even if the contrast on the photo is terrible. Cannon wasn't actually posing for me but he certainly seemed conscious of the camera :)

Following his Rookie of the Year award for the inaugural ABL season, Schmutter has had a couple of rough years in the ABL, averaging below .180 with the bat during the following two seasons. Whilst his .239 average for the 2013-14 ABL season won't put him amongst the league leaders, it was certainly a step in the right direction for the young Sydneysider.

This is my second post for Schmutter for 2013-14 - I had a previous design for him in the grey coloured road uniform, but grabbed this shot late in the season of him in the home blue coloured top.

Desan spent 2013 continuing his time in the Baltimore Orioles minors system, playing for Frederick Keys in the high A level Carolina League. He then returned to the Perth Heat for the 2013-14 ABL season - his fourth with the Heat and in the ABL.

Continuing with the Team Australia (oops, Southern Thunder) theme, Dening crossed the plate during the Australia vs LA Dodgers game last Thursday, becoming the first score against the Dodgers that evening.

Dening has played all four ABL seasons with the Sydney Blue Sox. This is my 2014-14 ABL season card design for him.

In honour of last night's game between the Los Angeles Dodgers and the Australian National Team at the Sydney Cricket Ground, I thought I'd choose Kennelly as the subject of today's post. Kennelly batted 2-4 for Australia against the Dodgers.

Kennelly returned for his fourth season with the Perth Heat in the 2013-14 ABL season. Tim had been released by the Philadelphia Phillies after having reached Triple-A level with them in 2012. He was signed  by the Texas Rangers who appeared to continue the Phillies experiment to convert him to pitching, however Tim only played 2 games of Rookie Level ball for the Rangers Arizona League affiliate in 2013.

Kennelly always seems to be pulling a face of some type in the photos I take of him. Here are two of the "better" photos I had of him from this last season.

Warner played his third season with the Canberra Cavalry during the 2013-14 ABL season. He has been a stable part of Canberra's "local contingent" during those three seasons. Despite being on the roster all season, Warner is one of those players who always seems to not play in the games I attend, and when he does, I struggle to get good pictures of him. I managed to get this shot in one of the final games for the season which I was reasonably happy with.

Goofy returned for his fourth season with the Bandits in the 2013-14 ABL season.

Ni was one of the more credentialed imports to play in the ABL during the 2013-14 season. Ni hails from Taiwan and played for the Chinatrust Whales in the CPBL between 2007 and 2008. He was then signed by the Detroit Tigers, pitching in 36 MLB games between 2009 and 2010, and in the minors until released by the Tigers in August 2012.

Ni joined the Adelaide Bite for the 2013-14 ABL season and obviously impressed with his early pitching, being signed  in December 2013 by the Los Angeles Dodgers to a minor league contract after pitching his 5th game for the Bite.

Sydneysider Harris returned for his fourth season with the Sydney Blue Sox in the 2013-14 ABL season. I don't know what he was talking about in the dugout during this photo, but he sure looked passionate about what he was saying ...

I couldn't resist putting the thumbs up shot onto the card for Perth Heat local Corey Adamson. Adamson spent 2013 playing with the Fort Wayne TinCaps and Lake Elsinore Storm - the Single and High A  affiliates of  the San Diego Padres. He returned to his native Perth Heat for the 2013-14 ABL season, his fourth season with the Heat. 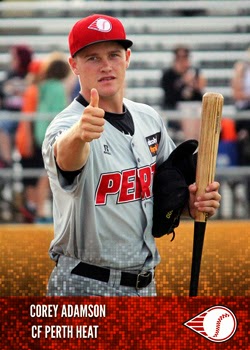 From the Seibu Lions in the NPB, Tanaka was a Japanese import for the Melbourne Aces during the 2013-14 ABL season. Tanaka had previously played a total of 16 games in two seasons in the NPB (2010 and 2012).

This wasn't the greatest photo of Tanaka, but I always seem cursed to never get decent photos of the Melbourne players, and with a lot of post processing I was able to salvage this shot.

The older of the local Sloan brothers made a return to the Canberra Cavalry in the 2013-14 ABL season following his previous stint in the 2011-12 season. Jason damaged his ankle in an off-field incident in 2012 and spent 15 months dealing with an ankle reconstruction in the intervening period.

Having joined his brother at the Cavalry, he was able to take part in a historic game between the Heat and Cavalry on the 18th Jan 2014. In that game, brothers Jason and Aaron Sloan played for the Cavalry as did brothers Robbie and Kyle Perkins. For the Heat, two of the four Kennelly Brothers - Matt and Tim both played, as did team mate Corey Adamson whose father Tony Adamson had joined the Heat coaching staff for the series as well. The game therefore featured 3 sets of brothers playing and a father and son combination as well.

The photo isn't the best of Jason, but it is an action shot of him completing a catch in game.

Aizenstadt was an American import from the Philadelphia Phillies organisation who played for the Brsibane Bandits during the 2013-14 ABL season. In 2013 he played for the Lakewood BlueClaws in the single A level South Atlantic League.

Ryan over at This Card Is Cool was kind enough to chase up some Japanese cards of Aussie players in return for some Australian cards that I sent to him. Thanks very much :) It's taken me a while, but I thought I'd start posting up some of the images of the cards he sent me. This post features Aussie former MLB players Jeff Williams and Brad Thomas. My Card of the Trade™ from these two players would be Williams' 2009 Touch the Game card - a high end, nice design card.

Lysaught returned for his fourth season with the Blue Sox for the 2013-14 ABL season.

I was fortunate that Canberra hosted one of the playoff games at the end of the 2013-14 season. This enabled me to get some better photos of the Sydney players at the end of the season. The only previous game of theirs I was able to get to was too sunny with harsh shadows, Sydney were wearing their gray uniform (I much prefer the coloured tops) and I wasn't happy with many of the shots I took. I was able to got a lot better photos (in my opinion) during the playoff game, such as this one of Lysaught, which have replaced nearly all my original 2013-14 card designs for the Sydney players.

I had always thought that local Perth boy Wise was going to make it to the Majors and good showings at Triple A level for Detroit in 2010 and 2011 seemed to lay a good foundation. However, a move into the Minnesota Twins system and a poor year with their Triple A franchise in 2012 meant that Wise would end up playing for DOOR Neptunus in the Dutch Major League in 2013 instead of knocking on the door to Majors in the US.

The upside of a lack of US affiliation meant more playing time in the ABL as Wise returned to the Perth Heat for his fourth ABL season in 2013-14, and was able to play in 13 games, rather than in the handful of cameo appearances he has usually made each season.

You may notice that I've included a lot more "dugout" photos in this years photos in my cards. Dugout photos are an interesting tradeoff in subject matter. They usually lead to a far more cluttered background, resulting in less isolation of the subject player, but those cluttered backgrounds can also add value, or provide more candid moments than what you see on the field. And sometimes, it was literally the only time I got a shot of that particular player - very common for relief pitchers and bench players :)

Aussie infielder Wearne returned for his fourth straight season with the Melbourne Aces during the 2013-14 ABL season.

American import Barnes returned to the Cavalry in the 2013-14 ABL season, his second season playing with Canberra. During 2013, he spent time playing independent ball in the US, mainly with the New Jersey Jackals in the CAMA, and a short stint with the Camden Riversharks in the Atlantic League.

I couldn't decide between the ready to field shot, and the chewing on the glove strap shot :)

A lot of the 2013-14 Dingo ABL team sets seem to have sold out, but I have managed to pick up a couple of spare sets for trade/sale purposes. I've gone through and pulled out all of the foreign (ie American, Canadian and Japanese) imports that I had spare cards of and have put them up for sale on Ebay (US site).

I'm looking to see if there's any interest in the individual player singles from the American market. If there is, I may try and get additional cards in future seasons for selling/trading.  There are 25 cards in total I've put up for sale. If they do sell, I'll look at putting up some of the Australian players who are affiliated with the American MLB clubs as well.

I'll let you know how it goes.
Posted by Adam and Elissa at 10:39 AM No comments: