I don't know what happened at the Sydney Blue Sox during the previous couple of ABL seasons, but there certainly seemed to be a mini-exodus of established Blue Sox players who have fitted in nicely with other ABL teams. One of these was former MLB player Trent Oeltjen, who made his way onto the Brisbane Bandits roster for the 2016-17 ABL season, having previously played on and off for the Blue Sox since the 2010-11 ABL season.

Well, as the 2016-17 ABL season is just about to wrap up, I've only just started to look at  my design for the 2016-17 season. In the end I've settled for a full bleed design with a "paint splash" banner. I did play around with some textures around and in the paint silhouette, but decided that I liked it flat and simple.

My first card for the 2016-17 season is Adelaide Bite player Steve Chambers. Chambers returned for his seventh ABL season in 2016-17, his second with the Adelaide Bite. 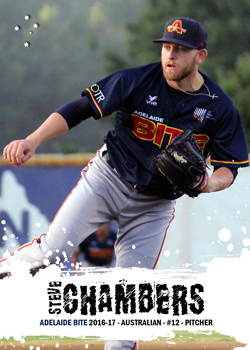 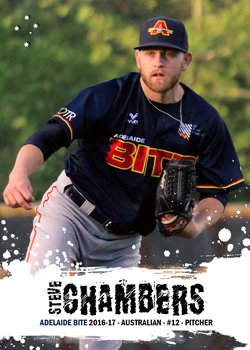 Perkins returned for his fourth ABL season with the Canberra Cavalry in 2015-16. In 2015 he spent time with the Colorado Rockies single A affiliate the Asheville Tourists.

Quesada was an American import from the Minnesota Twins organisation who played with the Sydney Blue Sox during the 2015-16 ABL season. He had spent 2015 playing for the Fort Myers Miracle, the Twins' Advanced A affiliate in the Florida State league. Unfortunately for Michael, he was released by the Twins during his time Down Under, and has subsequently turned to coaching.

Letourneau is a Sydney native who made his ABL debut with the Sydney Blue Sox during the 2015-16 ABL season, pitching in two games during the season. Letourneau had been named the NSW State League 1st Grade Pitcher of the Year in the preceding 2015 season.

Matt returned to the Heat for his sixth ABL season in 2015-16. He spent the 2015 northern summer  playing both double and triple A level ball for the Atlanta Braves affiliates (the Mississippi Braves and Gwinnett Braves respectively) and returned to Mississippi in 2016.

Cohen is an American import who played with the Canberra Cavalry during the 2015-16 ABL season. Cohen was originally playing for the Belconnen Bandits as an import in the ACT first grade competition before getting a call up to the Cavalry. He graduated in 2015 from Cal State University Northridge, and went on in 2016 to play in Germany with the Hamburg Stealers.

The 2015-16 ABL season was Baker's third and final season in the ABL, pitching for the Brisbane Bandits in 11 games, and starting in six.. Baker had returned to the ABL following an absence since the 2011-12 ABL season. In March 2016, a little more than a month after the Bandits won the Championships series, the ABL announced that Baker had passed away unexpectedly. No details have been given of his passing, with official requests for "the Australian baseball community to join us in offering both their condolences and respect for Trent's family's privacy."

Cowan is an American import from the Seattle Mariners organisation who played with the Adelaide Bite during the 2015-16 ABL season. In 2015 he played mainly with the Everett Aquasox, the Mariners low A affiliate, but also had stints at Advance A and Double A as well. In 2016 it's been back to both the Low and advanced A affiliates, although primarily with the Bakersfield Blaze.

Piccoli is an Aussie player who made his ABL debut with the Sydney Blue Sox during the 2015-16 ABL season, In 2014 he appeared in a single game for the Western Nebraska Community College. In 2009 he receievd a scholarship to the MLB Australian Academy Program (MLBAAP).

Mitchinson returned fro his fourth ABL season with the Perth Heat during the 2015-16 ABL season. I don't know of the timing but it appears that he has moved from Perth to Melbourne with his physiotherapy work, but is still an active member of the Heat bullpen.

Former MLB player Harman returned for his fifth straight ABL season for the Melbourne Aces in 2015-16.